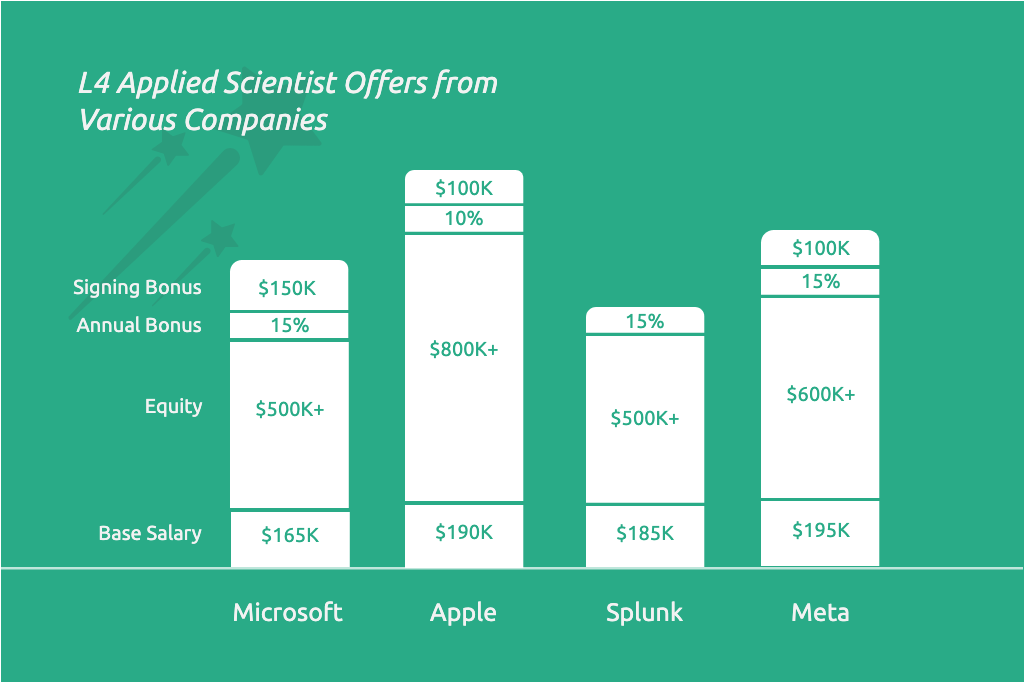 If your situation is unique or you want 1:1 support to ensure you maximize your compensation, please sign up for a free consultation with one of our expert negotiators.

What is an Applied Scientist

What does an Applied Scientist do?

Applied scientists employ ML to enhance commercial outcomes(e.g., revenue, cost, customer experience). The systems they create could be internal (such as fraud detection or product classification) or directed at customers (e.g., search and recommendations). They might also create internal datasets, tools, and techniques in addition to use-case-driven applications (such as feature stores, package/docker templates, model testing, and release checks).

An Applied Scientist at Amazon must pass a coding bar and has a higher role than a Research Scientist. For instance, at Amazon, Applied Scientists work on initiatives to improve the customer experience, such as Dialog Management, Text-to-Speech (TTS), Natural Language Understanding (NLU), Audio Signal Processing, and Automatic Speech Recognition (ASR).

The table below highlights the differences between Research Engineers, Applied Scientists, and Machine Learning Engineers:

Differences between Startups and Public Companies

Working at a startup versus a larger company like Amazon involves several vital differences. One difference is funding, as startups often need more funding which can affect the resources and support available to employees. In contrast, larger companies like Google generally have more financial resources and can offer their employees more comprehensive support and resources.

Another difference is the organizational structure, as startups tend to have flatter structures which can provide employees with more opportunities to take on responsibility and have a more significant impact on the direction of the company, whereas working as an Applied Scientist at larger companies like Microsoft tends to have more hierarchical structures with defined roles and responsibilities.

Startups tend to have a more laid-back and entrepreneurial culture focusing on innovation and taking risks. In contrast, larger companies like Amazon may have a more formal and structured work environment with a greater emphasis on process and stability.

Albeit, working at an established company like Amazon or Facebook will be less risky as these large-cap companies tend to be more stable and offer higher job security to their employees. With high risk comes high rewards, so while working at a startup may be riskier, it is also well worth it if the startup is successful.

Leading companies to work for as an Applied Scientist.

Some factors to consider when evaluating potential employers include the company's mission and values, the support and resources available to scientists, and the company's culture/work environment. Companies at the cusp of technological innovation and working on cutting-edge projects will have some of the best resources and opportunities for Applied Scientists.

Here are a few examples of companies that are often considered to be among the best places to work for Applied Scientists:

Depending on your location, the base salary offered by companies like Apple, Facebook, and Amazon will differ, along with the rest of the compensation components. Most companies compensate Applied Scientists according to the cost of living in their respective location and the going market rate for engineers in the area, so it's essential to be mindful of how your location will affect your pay. If you are not in the Bay Area, NYC or Seattle, your comp will likely be lower than the numbers you find online.

With that being out of the way, the base salary at Amazon and Apple, unsurprisingly, is the component that moves the least when negotiating. The aforementioned companies have a small band for the base salary within each level, so you'll likely only see your base move by a maximum of $20k-$30k.

Annual bonuses are another component that can be coupled with the base salary. The annual bonus is usually non-negotiable and highly subjective to the company you are applying to. Most big-tech companies offer performance bonuses; it is essential to be aware of the annual bonus when negotiating, especially when you have multiple offers. Companies such as Google and Facebook often apply a company multiplier to performance bonuses, which they also do for stock refreshers.

Of course, annual bonuses are non-negotiable, but if negotiating with a company like Amazon that doesn't offer them, you can always factor them into your counteroffer's base salary as your "yearly cash amount.”

Companies like Facebook and Microsoft follow a standard and linear vesting schedule of 25% yearly (typical initial grants last four years). Although, companies are starting to get very creative (to gain the upper hand) in how they vest RSUs.

At Facebook, Microsoft, Apple, and most other companies, RSUs are subject to a 4-year vesting schedule: 25% vests at the end of the 1st year (sometimes accompanied by a cliff), then 25% in each of the 2nd, 3rd, and 4th years. For example, if you were given a stock grant of 400k at Apple over four years, the equity would vest as follows:

Google and Amazon do equity vesting a little differently. Google has a front-loaded equity vest (33-33-22-12), while Amazon has a back-loaded equity vest (5-15-40-40). They often use these vesting schedules to inflate your offer and make it look more substantial than it is. In Google’s case, the recruiters often quote the first-year number as your per year total compensation, while Amazon adds a ‘conservative’ 15% growth factor on your future equity. Knowing how the recruiters frame your offer is paramount, as it could be the difference between accepting a great offer and an outstanding one.

At Rora, we have seen Applied Scientists get offered a small signing bonus without asking for it - recruiters often use this tactic to sweeten the deal. It’s often possible to increase the signing bonus substantially (this is where having leverage helps). With the proper leverage and framework, Applied Scientists can get up to $100,000 in Tier 1 locations (Bay Area, New York), which holds across companies like Apple, Amazon, and more!

Albeit, it's a common recruiter trick to leave a signing bonus out of the initial offer so they can add it as part of the negotiation (and avoid increasing the base or equity, which could require more senior-level approval). Some recruiters have claimed that the company does not offer sign-on bonuses, which isn’t always the case. Recruiters at Apple and Facebook will not initially include a sign-on bonus. Instead, a sign-on bonus is often added when specific leverage/information is shared with them.

Candidates often find it helpful to have a high-level overview of the negotiation process. However, this does vary by candidate, with one key vector being seniority.

Since we are on the topic of levels, Amazon does not follow the standard leveling conventions. Below is the mapping to Google and Facebook levels:

Most recruiters are reasonably transparent about this. However, discussing cross-offers. In that case, it's often helpful to say, "Facebook and Google have placed me at the senior software engineer level, Amazon L6", to avoid scenarios where the Amazon recruiter claims that Amazon L5 = Google L5, which is false.

Out of all the big tech companies, Amazon moves quickly through the negotiation stages outlined in the previous section. This can be both a blessing and a curse.‍

If you have unfinished interviews, we recommend letting those companies know that Amazon is extending you an offer as soon you hear from Amazon (other companies will know to accelerate their interview timelines).

Another tactic is to break up the Amazon negotiation into multiple steps:

This is only sometimes the case, but it is certainly more frequent at Amazon that the recruiter will bring the hiring manager into the negotiation.

It helps if you already have a relationship with your manager from the interview process. If not, it's worth building that relationship during the post-interview phase.

While this can sound scary at first (negotiating with your future boss), we've seen it work in the candidate's favor in many situations because you no longer need to relay messages through a third party (the recruiter) and can build rapport with the decision maker.

This is true for vacation, 401K, and many other benefits. It is worth asking about these and highlighting the gap vs. other companies, especially if you have a competing offer. For example, Amazon only offers two weeks of vacation (even for senior roles). That said, it is nearly impossible to negotiate a change in benefits into your contract. The reason to bring this up is as leverage to increase your total compensation. Also, it's worth noting that at the senior level many managers will informally allow their reports to take more than two weeks of vacation.

Amazon Can Go Above Band

This is still rare but more frequent than at any other tech company. To be clear, going above band means the company gets VP approval to give an offer above the stipulated range for the role/level/geography.

This is another reason why it's certainly worth your while to negotiate at Amazon because the delta can be huge between the initial and final offer.

What compensation to expect as an Applied Scientist at Amazon

Below is what compensation you can expect per level at Amazon as an Applied Scientist:

These are some of the offers we helped negotiate in Tier 1 locations like SF and New York. Although the numbers mentioned above seem very enticing, the proper framework and leverage were used to achieve such strong results. Additionally, getting a signing bonus at Microsoft has become very difficult due to macro-economical conditions.

Before preparing for a negotiation, make sure you have a good understanding of both your financial and career goals. This will help you decide what you should be asking for and make you better prepared to negotiate effectively.

For example, if you hope to save a certain amount of money each month or save for a specific goal, you should make sure the salary you are negotiating will help you get there. This may mean you ask for more salary instead of a non-cash benefit like equity.

If you haven’t yet received an offer, here are a few things to consider during the interview process:

Negotiating a salary, equity, and signing bonus for an Applied Scientist offer can be daunting. Still, with the proper knowledge and preparation, you can increase your chances of securing a fair and competitive offer. We recommend you:

Recruiters commonly use a handful of sneaky tactics to help pull the negotiation in their favor — and it’s essential to be aware of them to avoid being taken advantage of. The most common tactics include putting time pressure on you with an exploding deadline, mentioning that the initial offer is non-negotiable (even though it is!), selling you on company growth and saying that your equity value will increase substantially, and promising to revisit pay in the near future.

Some of the most common negotiation strategies that we use in rebuttal are:

Can you negotiate salary after accepting?

Are Applied Scientists in demand?

Being an Applied Scientist in tech is prestigious - many large companies are constantly looking for top-level talent. With more and more companies digitizing their data, the demand for scientists will continue to grow.

Will you lose your offer if you negotiate your salary?

A common question that is asked is a valid fear, especially given today’s volatile market conditions. There is always a risk substituted when you negotiate and offer, albeit if negotiation is done with the proper framework, the risk reduces substantially.